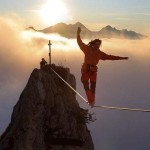 Sometimes we find ourselves in the position where we have to say words that will hurt another’s feelings.  Over the past months, I’ve found myself in this position and it has been gut wrenching.  Speaking my truth meant hurting someone I care about very much.  But, as I’ve gotten older, I realize that can no longer sacrifice my own truth at the sake of protecting someone else from hearing it.  It just cannot be done.

In a sense it feels selfish, a word and concept that I struggle with.  The word selfish has such negative connotations. Growing up, I was called “selfish” by my parents when I was doing something without regard to their (or other people’s) feelings.  The word was very rarely used in a positive manner.  Is it ok to be selfish?  I’ve asked myself this a thousand times.  I’m thinking it is.

I’m either on or off the tightrope

As I further explore this, the metaphor of a walking a tightrope came to me.  For so long, I’ve been on the tightrope, taking very careful steps.  I don’t want to fall, right? What happens when you fall? Things break, it can get ugly. So I was so careful to not say anything too dramatic or would cause a flare.  I kept an even keel.  I took one small step at a time… tried not looking down… that way I didn’t have to face my own truth or missteps in the process.  I discovered that I need to be either on or off the tightrope. there is no in between.

Falling is one of those things we all fear.  Falling in dreams, falling in front of others, it is humbling and shows vulnerability.  I’ve taken some real hard falls in the audience of others, it can be completely  humiliating. But, to get beyond this whole thing, I had to take the risk and fall off the wire I was walking.  What I found is that while I did get dirty and banged up a bit, I survived.  Go figure.

Free to be me

And so, as much as I am sorry about saying the words that hurt, I find that I am… for the first time in a long time… free to be me.  I am discovering a new voice who is aligned with my inner spirit who wants to fly.  I am no longer held to another’s expectations of who I am “supposed to be”.  I no longer need to push down my feelings to hold another’s before my own.

I’ve also learned that by speaking my truth doesn’t mean that I don’t care about others.  In fact, it’s a more loving way to be.  Who knew?