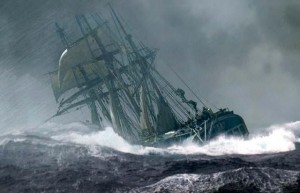 I was watching the movie “Master and Commander” the other night which stars Russell Crowe (one of my favs for a number of reasons :-)).  For those of you who don’t know the movie’s premise, it’s set in 1805 during the gallant yet brutal Napoleonic wars. Crowe is a British Captain who commands a beautiful multi-masted vessel which is sets out on a mission to overtake a French enemy ship. He  pushes his boat and crew to points of almost disaster to achieve his quest.  It’s set in all it’s glory, epic like Gladiator… you can’t help but feel like you’re on the ship.

There were several gripping moments throughout the movie, but there was once scene that connected with me at a deeper level … and I thought… wow this is so relevant!!   I’ll explain…

The scene comes just after Crowe executes a brilliant naval maneuver and escapes a defensive chase from the French vessel by faking them out … and regains his position of power.   The crew is esctatic and thrilled to be back on the offense vs. the defense.  Then a terrible storm hits and the ship is rolling left and right.  All of a sudden survival is the goal.  Part of the crew are a number of young boys who are preparing for a life on the sea, it was very much part of the times and the expectation of making boys to men.  The storm came on so fast that they did not have time to take down the all the mast sails.  He send up one of the young boys who is popular on the ship to wrap up sails on the biggest mast.   He climbs up, and he’s hanging on for dear life as the ship tosses back and forth.  He looks frightened out of his mind, you can feel his fear.  He struggles while the boat is thrashing around, and yells down for help (and can barely be heard due to the storm), finally the Captain ordered another young boy to climb up and assist.  But just as the second young boy starts the treacherous climb, you hear a huge “CRACK” and then the mast breaks off with the boy attached and it falls into the turbulent sea.

Watching it you feel the horror, hopeful the boy will be saved.  The crew were all yelling to the boy to “swim!!” but you know he won’t make it through the huge wave swells.  The Captain is yelling to the boy, watching him struggle… he is visibly upset because he really liked this boy. But his officer is urging him to cut the ropes to the mast otherwise the whole ship will go down.  The mast is dragging down the whole ship, turning it on its side.  Stuff’s falling out, crew are clinging to what they can as the mast force pulls the weight of the ship down.   As awful as it was, the Captain realized that he needed to sacrifice the one life for the 100 on the ship.  And he grabs a sword and starts chopping at the ropes that is connected to the mast in the water, one by one.  Finally the mast is severed, and the ship rights itself back up.  You can see the boy in the distance sitting on the mast getting further and further away.  His fate was determined.

I felt a knot in my stomach watching this scene.  How horrible to make such a life or death decision.  Then something clicked in my mind.  Is there something in my that life represents this broken mast?  What is dragging me down and not letting me right up my ship? With that view of things, I began to relate on a different level.

With the economy being the way it is, I thought it was a good metaphor for the stormy sea.  It’s out of my direct control, and the only way to survive is to batten down the hatches, reduce expenses as much as possible and ride the storm out.  It will eventually pass. Storms always do.

It also put focus on the importance of making those tough decisions.  They aren’t easy and when we’re not looking at real life or death, we can postpone those decisions.  The reality is that we are hurting ourselves and others in not making them.  Some times we need to let go of situations, people, jobs, relationships, and so forth. Hanging on to things that are not helping and are dragging us down only perpetuates a situation that needs to be “righted up” like the ship.

We all have difficult decisions to make.  We all need to fill in the blanks for ourselves.  I filled in mine.

What does mast represent for you?