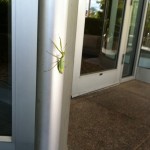 Whenever I travel, interesting things happen to me.  I’m not sure if its because I’m out of my element and I’m more aware?  I don’t know, but I am starting to see a theme of when I receive interesting life messages.

I was in St. Louis for the past week for a marketing and sales conference that I help organize every year (with a fabulous team of others).   This was our 6th year with the event, it is always a good time to reconnect with peers and recharge the creative batteries.

After a very busy morning of back to back presentations, I went to sit outside to get some fresh air and sunshine.  It was a lovely day, and I was feeling the relief of having some of my bigger commitments for the event behind me.  The  sunshine felt so good. As I sat there, I imagined it was similar to how a cat may feel when it curls up in a spot of sunshine.

As I was sitting there, I noticed a praying mantis making its way, crawling up the side of the revolving door.  It was sitting right on stainless steel, appearing to hang from nothing.  I could not remember the last time I saw a praying mantis up close.  So I watched with fascination as it made its way up the doorway frame.  It had this very gentle, slow approach. It bobbed up and down, gently placing its foot/claw (what is that thing anyway) on the metal,  testing each step out before shifting itself forward.

How was it holding on <I thought>?

Slow and methodically, it made its way up the wall of nothingness.  It did not rattle itself when someone would brush it’s quiet presence and swing the door around.  I was nervous a couple of times as it entered what I though was “dangerous ground” where it would be swept away by the door movement.  But, to no avail, the Mantis was vigilant and steady.

At one point I decided to take a picture of this creature in which I was so absorbed in watching.  I got close with my phone and snapped this photo you see here.  As I got close, the creature turned its head and looked directly at me, leaning over toward me as I snapped it.  It kind of freaked me a little, what could it be thinking or, worse, what would it do?  Then I just laughed at myself, how silly I’m afraid of this thing.  He’s probably afraid of me!

I sat back down and just watched him make his way up the door, I eventually lost track of him. I felt there was some sort of significance to what I observed.  The slow methodical approach, taking careful, assured steps with a peacefulness about it despite the clear insanity of what it was doing – climbing a metal wall.   There is surely a life metaphor to absorb here.  I thought that was the end of my praying mantis brush.  I was wrong.

We landed in Boston around 11:30 pm after a long day and connecting flights.  As I entered the jet way, I was expressing my gratitude with the crew for a safe arrival.  I was passing by the pilot, and he drew my attention to something sitting on the wall…guess what it was?   It was ANOTHER Praying Mantis. But not just ANY praying mantis, but A HUGE Praying Mantis.  I have never seen one so large.  It had to be as long and wide as my foot, and I wear a size 9 women’s.  It had the longest wings I’ve ever seen.  Again – it was in the oddest place – there is no vegetation there.  It’s in a jet way on a plastic wall, just hanging out.   So I laughed and stood, fumbled for my phone with the hopes to grab a picture (which I didn’t get) when  Shari, my travel partner was getting off the plane behind me.  I told her to look up so she could see it, and as she looked, it flew right across her to the other side of the jet way.  She freaked a little, but did pretty well considering.

<OK> I think in my head…sighting number 2.  If  I was confused about the significance before, I should not be now because this one was freaking huge.  I make a mental note to revisit the significance of a Mantis when I got home.

Then this morning, I get up grab my mobile phone to look at it for the first time and what’s looking back at me on my phone?  The image of the mantis I took in St. Louis.  Now, this picture is nestled in the middle of the photo album from the event, it was not the last action I took on the phone from the night before because I remember I was texting updates about my arrival AND recalled looking at my phone in the middle of the night for a few moments in time.

“That’s IT!” <I think>.  I head over to set up my computer so I can look into the significance of these events. Surely there must be something for me here.  And there was.  The first thing I did was hit Wikipedia to find out about it.  What I did know about the Mantis is that is a form in Tai Chi that is pretty powerful as some moves were taught to me at one point,  but that’s all I knew.  Here’s what I found out (some of it was not so sexy but…):

The scientific name Mantodea comes from the Greek words μάντις meaning a prophet, and εἶδος for form or shape. The name was coined in 1838 by the German entomologist Hermann Burmeister. The common term mantis is also from the Greek word μάντις for prophet.[3][4]

Ok, that’s interesting.  So I continued to search for the symbolic meaning of the Mantis and found a couple of things worth sharing…

The mantis comes to us when we need peace, quiet and calm in our lives. Usually the mantis makes an appearance when we’ve flooded our lives with so much business, activity, or chaos that we can no longer hear the still small voice within us because of the external din we’ve created.

After observing this creature for any length of time you can see why the symbolism of the praying mantis deals with stillness and patience. The mantis takes her time, and lives her life at her own silent pace.

This is similar to what I thought back when I was watching the Mantis in St. Louis.  Then I found this reference, and it startled me a little,’cause it reminded me of the moment of when I took the picture and it looked right at me:

The praying mantis is the oldest symbol of God: the African Bushman’s manifestation of God come to Earth, “the voice of the infinite in the small,”* a divine messenger. When one is seen, diviners try to determine the current message. In this culture they are also associated with restoring life into the dead. “Mantis” is the Greek word for “prophet” or “seer,” a being with spiritual or mystical powers.

Meet the eye of a mantis and feel the presence of God. Interspecies communicator Sharon Callahan says, “the I of me, and the I of the creature became one and we rested on the breath of God.” She notes that a praying mantis appears sometimes in person, other times in a dream or even in an object of art, but always with the “shiny conscious eye ~ God looking at me through the eye of the Mantis.” 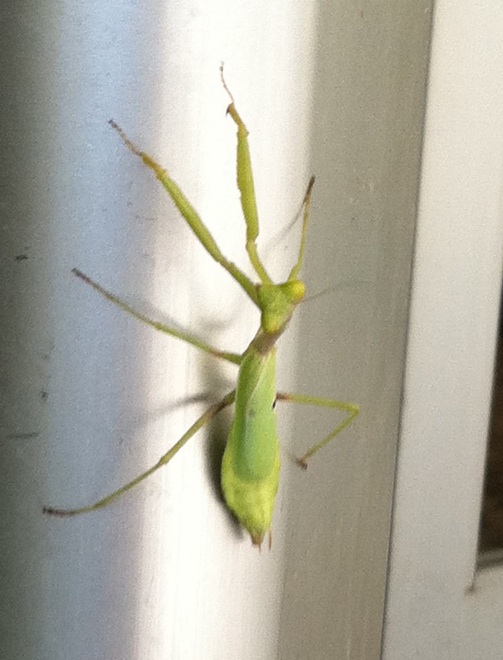 As you go through your life, do you see recurring themes on your path?  And…are you paying attention to them?